A Message From Our Founder

Dance Connection began as Diana's Dance Studio, a small-town, individually owned business that began in a young girl's basement.  At the tender age of 12, Diana Richardson (Moates) began teaching neighborhood children her passion - tap, jazz and ballet.  She was very talented, having won numerous awards for her endeavors.  As her "business" grew, following graduation from Ball State, Diana married, started a family and once again, continued her business. 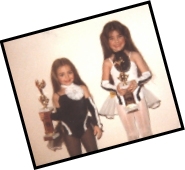 Located in the back half of the Wanamaker Floor and Carpet Store, Diana taught students to love the art of dance as she did.  This was our introduction to Diana.  Sisters, Melissa Schott and Michelle Martin, were students.  They evolved into talented young ladies at the tender age of four and six.  It was then that Diana invited them to entertain in a Showcase for DEA (Dance Educators of America.)  The rest is history for the Schott sisters who will always be referred to as "Me and My Shadow," named for their show stopping tap duet performed at this showcase.  To this day, we meet instructors who were present at this event and remember their performance.  As a family, we felt we owed our success to Diana.  She traveled extensively to out-of-state national competitions with her students, always there for her students and their families. 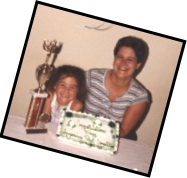 Diana's business outgrew the location, and a few years later she re-located further west in a converted house.  In 1984, tragedy struck many lives that were forever changed!  Diana died in a terrible auto accident on an icy road as she headed to the studio for classes.  We, too, were headed to class; however, when we arrived there was a note on the door expressing apology for a cancellation.  Two hours later, we saw the news on television.  Having attended many funerals in my lifetime, I have never seen one attended by so many.  Former and current students of all ages came to say good-bye to a dear friend and teacher.  The loss was felt throughout the community.

Two additional instructors continued through recital, struggling to keep the spirit alive.  Because Diana's husband was left with 2 small children (ages 3 and 6) he could not continue to maintain the studio.  We began searching for another studio that felt like the "home" we were losing.  None could compare!  Some were bigger and fancier, but none in our eyes could match what we had grown to love.  In March 1984, we offered to purchase Diana's Dance Studio and were amazed when Mr. Richardson accepted.  It became official on April 1, 1984.

As new owners of Diana's Dance Studio, we struggled.  We were faced with doubt from our peers and adversity from those who questioned our intent and mocked our endeavors.  In 1986, we finally accepted the reality that keeping the name as Diana's Dance Studio was not appropriate for the business.  Everyone who called wanted to speak to Diana.  Effective April, 1986, Dance Connection was born!

The ideas and philosophies of Dance Connection have never changed.  We've always provided quality instruction, and consideration for students and their parents always comes first.  On numerous occasions, we have shared our business and home with students and families following special events, including recitals and other programs.  We have chaperoned young ladies and additional families on week-long competitions and dance cruises, not to mention numerous local events.

Today, we at Dance Connection feel proud of our attempts to sustain Diana's presence through our instruction, care and concern for all who enter our doors.  We hope we've made her proud!  My favorite saying says it best:

"A hundred years from now, …it will not matter what my bank account was, the sort of house I lived in, or the kind of car I drove… …but the world may be different because I was important in the life of a CHILD…"
—Author Unknown

Oh, by the way, I forgot to mention, I've never been a dancer, simply a director and owner.  Melissa and Michelle, however, are nationally recognized for their performances and choreography in tap, jazz, ballet, theatre, vocal jingles, voice-overs and children's educational vocal instruction cd's used in schools nationwide.

We've had students who've become performers, doctors, teachers, nurses and models to name a few.  What a success!  When Melissa and Michelle share pride in their students' endeavors and accomplishments, much like another young woman 34 years ago, I know time has healed our sorrows.  Diana's spirit lives on through her students!

Thank you for taking the time to share in our lives and our love for dance.

"Your studio is the epitome of what dance experience should be for children! Thank you for all your hard work, time, and energy!"

Josie P.
"Brian and I were watching videos last week comparing her last year to this year and we are AMAZED at how much she has grown. She doesn't even look like the same girl dancing. She seems to have matured and is more comfortable expressing herself than we have ever seen. We of course want to give that credit to you and the amazing Dance Connection instructors. You have all been instrumental in building her self confidence and made her feel completely comfortable with who she is and what she can contribute. I cannot wait to continue to watch her grow as a dancer and young lady. So again, THANK YOU for everything you do! Dance has made such a huge difference for Haley and we are so grateful for all the opportunities Haley has been given!"

Donna H.
"Wonderful staff with a huge amount of talent.  They have the whole child in mind!!!  It is not just about technique!!!"

We want to wish all four of our Dance Connection t

We are excited to welcome @strbryte713 to our stud

Excited to welcome @deansdarkroom back to the stud

We want to wish these four dancers good luck as th

Fun day walking with this amazing group in the Bee

Super fun day getting together with our fabulous t

We are excited to announce our auditions for our D

So these two amazing Dance Connection tappers did

We are very proud to announce the Encore Grand Nat

Day one for these lovely tappers At Tap City 2022!

Our tap instructor Miss Haley teaching a step or t

We are excited to announce that Miss Marissa and M

And just like that our last competition of the sea

From our first to now our last competition of the

And @kaegraydance is in the house!! Great turn out